How to find issues in PowerShell scripts Print

A script is not working as expected or is throwing errors. A way to analyze the script is needed because the cause is not clear.

Many scripting environments come with a debugging tool. Using that it is possible to step trough the single lines of code or stop the execution of the script at a defined point so you can analyze it while it is running. It is also possible to look at the variables to see exactly what happens.

While using the debugger it is possible to set Breakpoints in your code. A Breakpoint will pause the execution of a script until you manually continue. You can step trough every single line or continue the execution until the next Breakpoint is reached. This is also helpful to check the variables and keep track of the changes or check whether an if statement or a loop are working correctly.

The powerVault cmdlet Show-Inspector shows all the variables that are used in the script. This can be very useful to check variables at specified points in your code. This will show the inspector window and stop the execution of the script until the window is closed. You can also highlight a specific variable. To use the Inspector the powerVault module must be imported

and following code has to be executed. In this example $file is highlighted:

When opening your script in a powerShell ISE there is a "Debug" button in the toolbar. When you click on that you can click "Toggle Breakpoint" to set a Breakpoint at the desired line of code. You can also press F9 while the cursor is in that line. Before you can start debugging your script has to be saved.

Once you have created the Breakpoints at the required locations you can execute the code. It will stop at the first Breakpoint. Now it is possible e.g. to check the variables writing them in the console and pressing Enter.

Visual Studio Code provides some additional debugging features but you'll have to install the powerShell extension.

Now you can open the script and set the Breakpoints where they are needed. It is possible to set Breakpoints by clicking on the space left to the Line Numbers or by pressing F9 while on that line of code. Press F5 to begin debugging. Visual Studio Code  will show you a list of current variables in the Auto section on the left and you can also watch important variables to better track the values. To watch a variable click on the Plus ( + ) symbol and insert the name of the variable to watch. At the top of the application you can find the controls for the debugger. 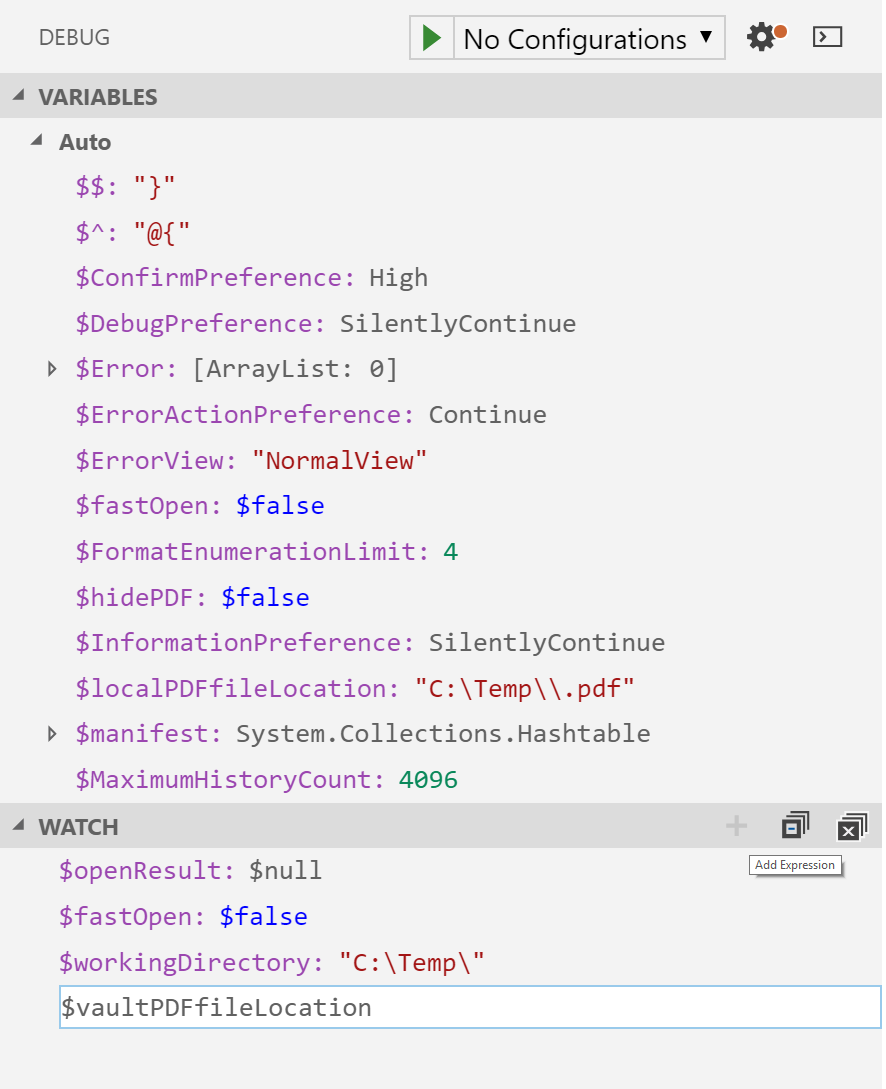